So, we’ve been in lockdown for I don’t know how long, but, as much as I love her, My Louis has gotta go back to wherever in the hell she goes for work.  Look at what the woman is doing to me:

That’s a Red Barron cap; she’s also had scarves and other shit on me:  Humiliating. The only flying taking place is unused poop bags caught in the wind.

This one took off and danced in the air for a bit, but My Louis was too busy jabbering to catch it on digital.

I love my balcony time, but when she starts capping me with hats, I’m thinking how my weak hind legs can lift me up over that rail.  Wanna see Red Barron Badger?  Watch me fly like a rock.

Badger the Boneless I am not.  But, if you look behind me you’ll see they still put the trash bag up high because I’m more of a pirate than a viking — I can sniff out the bit of booty stuck to napkins, cans and cartons.

It’s not just me she’s got doing goofy things.  Joe is pretending to jack rusting construction machines (lol look at him still holding my leash like I’m in any danger). 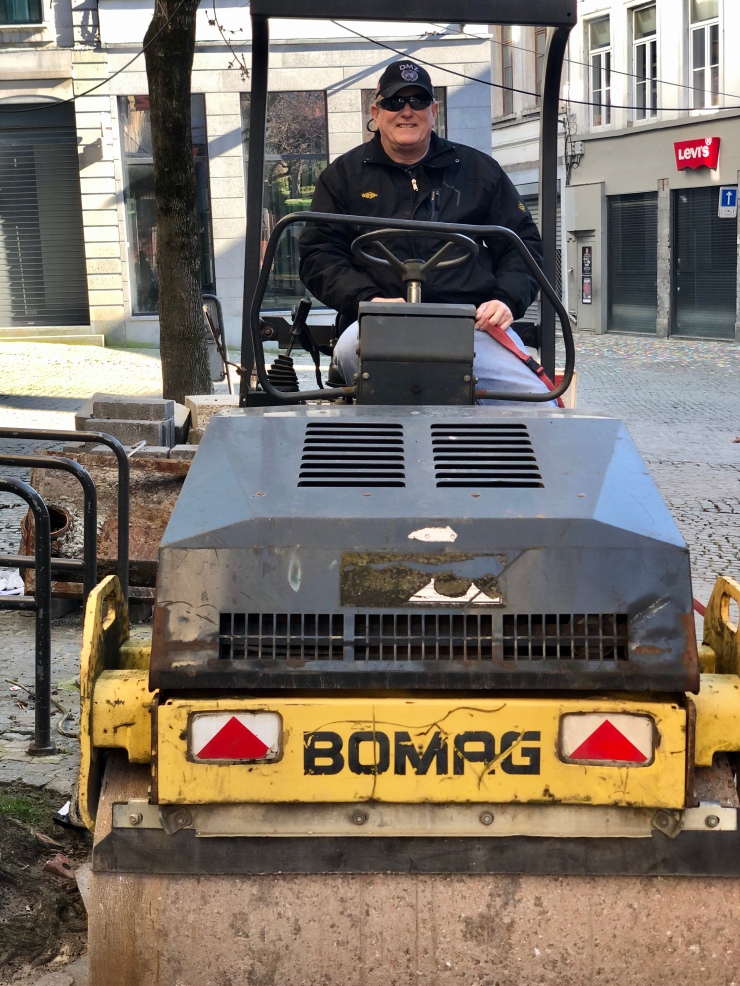 She’s riding poles since there’s no traffic or people in sight. 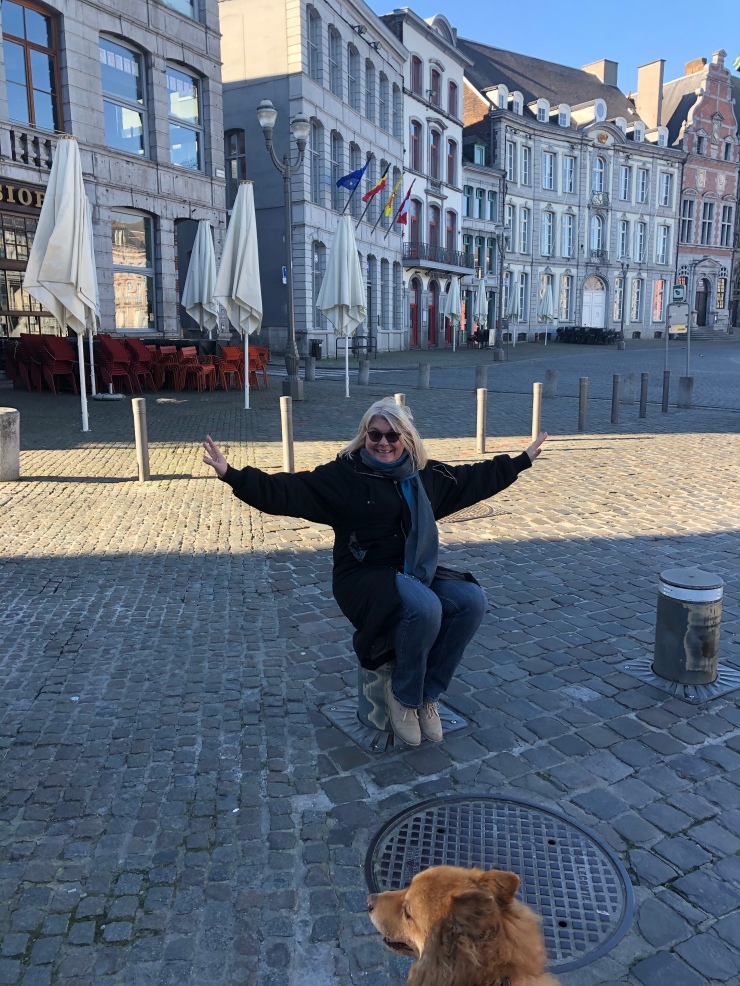 Behind her is Excelsior, our favorite bar. I don’t know why she’s so happy because better times saw her ass parked on one of those red chairs waiting to be warmed again.  Look at them all gawking, barking “Pick me!”

Long gone are the days of cafe sipping.  My bar time life now consists of sniffing out dead Jupiler cans, may as well go back to licking ass. 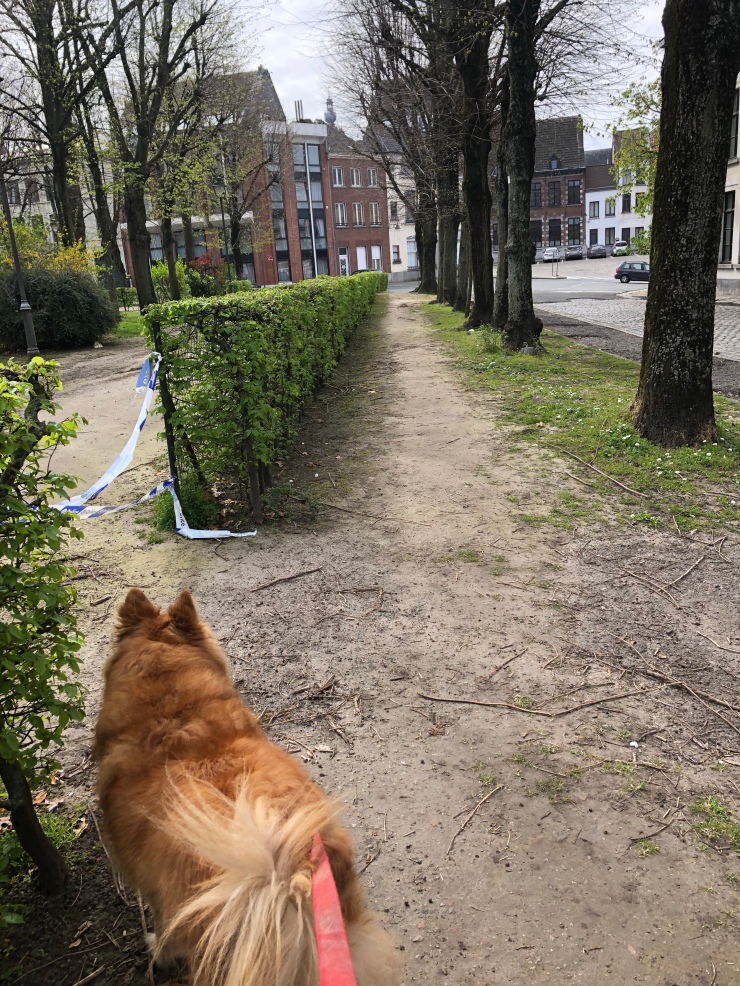 We can’t even hang at the parks anymore since they’ve been sealed off with police tape.  Shhh sometimes Joe lets me run wild and poo like mad all over the place.  It’s all good; he’s well trained and breaks the law to come in and scoop it up.  That man is such a hound, Dog love him.

It’s not all bad though.  I am getting to walk more, and Spring is still parading her blooms and bands of birds (and all the poo bombing that goes with it — no street cleaners leaves for a lot of shit stains).  Ironically, the weather has been great.  It’s as if Mother Nature is basking in her release of the virus, and it makes for marvelous sniffing and sunning.

Yeah My Louis, Karma is a bitch … People, this is what she looks like almost all damned day.  When she takes that robe off it’s worse.   One who eats so many croissants should not wear leggings and T-shirts.  I’ll spare you that view.  But, back to the sniffing:  Spring in Belgium is the best even when your people are going crazy.

Since there aren’t that many humans outside, you can really hear the birds sing too.  I’m pretty sure a pair of lusty doves belted out Kelly Clarkson’s “Since you been gone,” then they got down to business right there on the driveway — whose going to run them over?

Walking the streets is great too.  At night is when it’s best because it’s just us and the lonely cobblestone. Hell, people don’t even lock their shutters anymore — why bother? 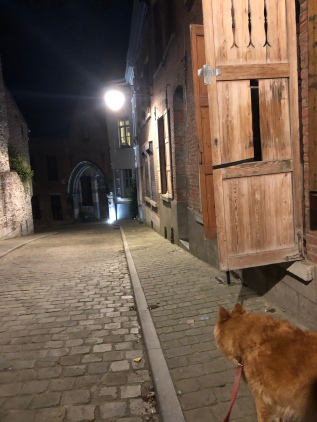 My howling habits have changed too.  I used to howl at sirens and drunks on our street, but the drunks are gone and the sirens are no longer a novelty.  The good news is it seems there are less sirens than a week or two ago, but we still hear more than normal. Less people are being rushed to the hospital, but a lot of them are still sick and dying. My people, however, are healthy and getting rounder by the minute, but now that they’re home all the time and there are less visitors, I stare at the windows more, and I’ve taken to barking at the curtains when they shiver in the breeze, or the moon when it stretches above the rooftops.  Hehehehe you should have seen my people jump because it took them forever to figure out I wasn’t barking at ghosts. 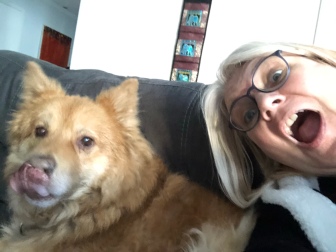 Mostly though, we’re doing this:  chilling or taking ridiculous selfies. She can’t even manage to focus right anymore.  Someone needs to tell her there is such a thing as real grape juice.

And bark my life, she’s found more costumes.  It’s another sunny day, but she’s coming at me with a raincoat and booties.  This lockdown shit has got to end…